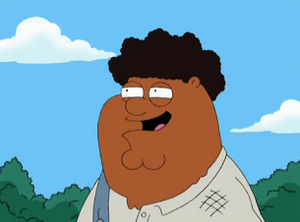 Nathaniel "Nate" Griffin is Peter Griffin's Great-Great-Great-Great Grandfather and was an African slave. Nate Griffin was supposedly born in Quahogswana, Africa, and his real name was Richard Bachman, instead like many slaves, being allowed to choose his own American name. He belonged to the Pewterschmidt family and was their stable boy. While working as a slave for the "massa", Nate peed in their cereal each day and had sex with Lois's great ancestor as well as her fine sister. He currently resides in Heaven where there is a shortage of chairs.

Peter did not know of his black lineage in "Peter Griffin: Husband, Father...Brother?", after his son Chris started adapting other customs. After discovering he had a black ancestor at the Quahog Public Library he wasn't sure how to handle the information. He instantly became a part of the black community with help from his friend Cleveland Brown. He soon learns that his father-in-law, Carter Pewterschmidt's ancestors were Nate's owners. Peter received retributions from them, but Peter misuses the money by recreating the set of Pee-Wee's Playhouse in his own home, transforming it into Peter's Playhouse. While Peter is in a bathroom wondering what to do, Nate tells him to do what is right.

When Peter told his family about the family history in "Untitled Griffin Family History", he tells them that Nate married Lois Laura Bush Lynne Cheney Pewterschmidt. Their marriage produced three children that resemble modern-day Stewie, Meg, and Chris. He and Lois escaped from his master and her father Silas Pewterschmidt, who did not approve of the relationship. Griffin was shown to be good friends with Al Cowlings. Griffin would later found the Department of Motor Vehicles just so he can frustrate and irritate white people.