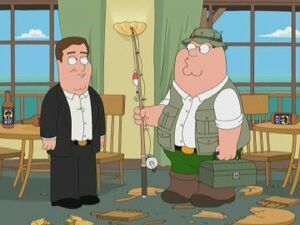 In "Play It Again, Brian", he married Peter Griffin when he and Peter were at a bar at the Seaside Inn, while the latter was drunk. Peter did so believing that the gay marriage wasn't real. But Lois pointed out that in Massachusetts gays can marry. After Peter brawls with Brian, Lane says that he and Peter are supposed to be meeting Lane's parents for dinner. Peter and Lois leave Martha's Vineyard and the status of their relationship is unknown.

Nathan is voiced by Bruce Lanoil.

While being held at gunpoint by Mahmoud to drive a van full of explosives in "Turban Cowboy", Peter admits he thought his end would be similar but involving Nathan Lane.

Stewie tries to teach Brian to roll over and land on all fours in preparation for a dog show in "Boy (Dog) Meets Girl (Dog)", noting that Nathan Lane could do it.

Retrieved from "https://familyguy.fandom.com/wiki/Nathan_Lane?oldid=219414"
Community content is available under CC-BY-SA unless otherwise noted.