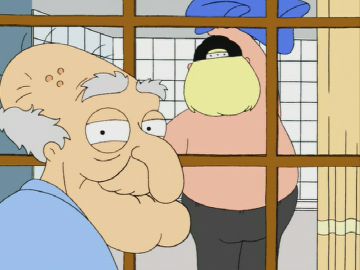 National Lampoon's Animal House is a 1978 American comedy film directed by John Landis. The film is about a misfit group of fraternity boys who challenge their college's administrators. Of the young lead actors only John Belushi was an established star; several of the actors, including Tom Hulce, Karen Allen, and Kevin Bacon, were early in their careers.

When Herbert hops outside Chris Griffin’s window on a ladder in "Brian the Bachelor", the whole scene up to when he falls down is a parody of a scene from the film.

In "Mother Tucker", Stewie Griffin intends to play a clip of "Food Fight!" from the film during a broadcast of Dingo and the Baby. He instead plays a clip from Philadelphia by mistake.

When Lois tells Peter that Brian tried to have sex with her in "Play It Again, Brian", Peter asks, "Was he bigger than me?", a quote originating from Animal House.

Retrieved from "https://familyguy.fandom.com/wiki/National_Lampoon%27s_Animal_House?oldid=91250"
Community content is available under CC-BY-SA unless otherwise noted.