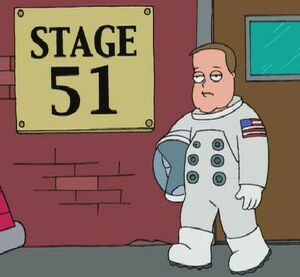 Neil Alden Armstrong (August 5, 1930 - August 25, 2012) was an American aviator and a former astronaut, test pilot, university professor, and United States Naval Aviator. He was the first person to set foot on the Moon. His first spaceflight was aboard Gemini 8 in 1966, for which he was the command pilot.

Stewie compares the radiations suits the family wears in "Da Boom" to looking like a gay Neil Armstrong.

Meg Griffin confuses Armstrong for trumpet player Louis Armstrong in the song "You've Got a Lot to See" in the episode "Brian Wallows and Peter's Swallows". In response, astronauts immediately start playing the trumpet.

A cutaway shows Armstrong faking the moon landing at a television studio called Stage 51 in "Don't Make Me Over". He kills the first man to realize the hoax. He later appears on the set of Saturday Night Live with all others who appeared in the episode for the goodbyes segment, as is customary on the show.

In "The Big Bang Theory", a live-action clip of Neil is unable to get the last word with ground control.

Retrieved from "https://familyguy.fandom.com/wiki/Neil_Armstrong?oldid=223464"
Community content is available under CC-BY-SA unless otherwise noted.