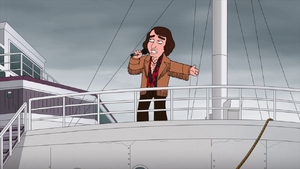 As Stewie's Sherlock Holmes seeks out professor Moriarty who is trying to flee to America with the royal jewels in "V is for Mystery", he deduces that the ship with Neil Diamond on it is headed to America. Neil sings a bit of his song "September Morn", and Stewie notes that he actually expected him to be singing another notable song of his, "America".

Diamond is voiced by Alec Sulkin.

Retrieved from "https://familyguy.fandom.com/wiki/Neil_Diamond?oldid=203316"
Community content is available under CC-BY-SA unless otherwise noted.