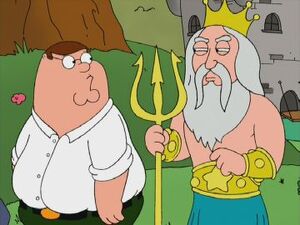 Neptune is the god of water and the sea in Roman mythology, a brother of Jupiter and Pluto. He is analogous with but not identical to the god Poseidon of Greek mythology, and is imaged often according to Hellenistic canons in the Roman mosaics of north Africa.

Peter Griffin tries to impress Bob Funland by claiming that he became Neptune in "A Picture's Worth a Thousand Bucks", until Neptune shows up angry.

Joe Swanson dresses as Neptune as part of Peter's plan to reunite Billy Finn with his wife Joanne in "Be Careful What You Fish For".

Retrieved from "https://familyguy.fandom.com/wiki/Neptune?oldid=120635"
Community content is available under CC-BY-SA unless otherwise noted.