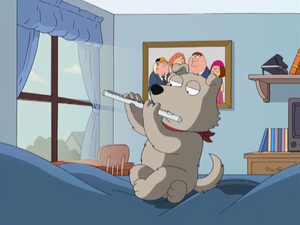 New Brian was the intended replacement for Brian in "The Man with Two Brians". Peter Griffin adopted him when he thought that the primary pet Brian was getting too old. New Brian's calm ways and generally good nature made him a quick family favorite. He enjoyed karaoke, having sung "Summer Nights" with Lois. He also enjoyed songwriting, writing "I Like Farts" for Peter, and he also enjoyed humping stuffed bears, such as Stewie's bear, Rupert. He also played the flute for his new owners each morning, helped Chris with his homework, and got deodorant for Meg. He was not judgmental regarding people's addictions and habits.

He won over the family, eventually making Brian feel like an outcast, causing him to move out of the Griffin home and in with Cleveland and then with Quagmire. Stewie visited Brian and told him of how terrible New Brian is. Stewie approached New Brian and told him to leave because everybody hated him. New Brian responded that everyone loved him, especially Rupert, whom he had humped. Stewie initially appeared unfazed, but then brutally killed New Brian off-screen, throwing his corpse in the garbage and forging a suicide note. The family was shocked, though they nonetheless happily accepted Brian back.

He is voiced by John Viener.

Retrieved from "https://familyguy.fandom.com/wiki/New_Brian?oldid=181315"
Community content is available under CC-BY-SA unless otherwise noted.