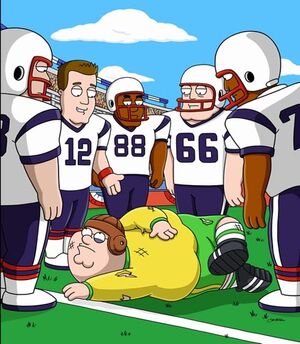 The New England Patriots, commonly called the "Pats", are a professional American football team based in the Greater Boston area, playing their home games in the town of Foxborough, Massachusetts at Gillette Stadium. The team is part of the East Division of the American Football Conference (AFC) in the National Football League (NFL).

In "A Very Special Family Guy Freakin' Christmas", they played the Steelers once again, this time in throwback uniforms, on Monday Night Football. When Peter Griffin dared to record the game, the government intervened and asked if he had the permission of both ABC and the NFL. Griffin showed he only had permission from ABC, who retained broadcast rights of Monday Night Football until the 2006 season. Because he did not have both, the government broke his VCR.

They also appeared in "Patriot Games", when Peter signs with the team. Although some of the players' numbers were done randomly for the episode, some were the numbers of actual players on the team that season. Peter's number was actually filled that season by Tom Ashworth, who played the Tackle position. Former Wide Receiver Troy Brown and current Quarterback Tom Brady voiced themselves in the episode. Coach Bill Belichick, though he did not appear, was mentioned, though not by name.

In "Lethal Weapons", the citizens of Quahog would not let the leafers, who want Horace to turn on the game of the rival New York Jets, deprive them of watching that week's Patriots game while at The Drunken Clam.

When the Patriots are beaten by the Buffalo Bills in "3 Acts of God", they guys set out to find God to see what his beef is with the Patriots. God reveals that he has disfavored the team because coach Bill Belichick refused to smile after being given three Super Bowl victories. They guys manage to get Bill to smile and God agrees to leave the Patriots alone.

Peter works as a television announcer for a Patriots game in "A House Full of Peters".

When he hopes for a peaceful death at a factory that makes protein shakes from dogs in "The Woof of Wall Street", Brian sees Michael Vick enter the processing room, followed by Eli Manning, who notes that he is a real idiot psychopath, as a subtitle appears and notes that it really isn't true, but the episode was written by New England Patriots fans. Gillette Stadium can be seen on the television at the Drunken Clam when Peter brings in a bull.

Retrieved from "https://familyguy.fandom.com/wiki/New_England_Patriots?oldid=203728"
Community content is available under CC-BY-SA unless otherwise noted.