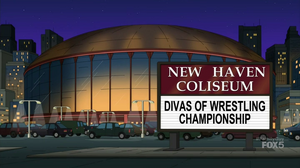 The New Haven Coliseum is where Peter decides to confront his sister at Meg's urging over her bullying in "Peter's Sister".

Karen Griffin, a professional wrestler who goes by the name of "Heavy Flo" engages in a match with Her Majesty's Secret Cervix. When she defeats her opponent, she finds herself confronted by Peter, disguised as "Maxi Patty", a challenger. She agrees to the match when called out, and discovers it is really Peter. But when she decides to severely hurt him for standing up to her, she is blindsided by a chair-wielding Meg who calls herself "Teen Laqeefa."

Meg admits that even though Peter bullies her on occasion, he is still her dad and she loves him. Peter is surprised because his own mom and dad stood by and allowed Karen to beat him as they express their love for each other.

Retrieved from "https://familyguy.fandom.com/wiki/New_Haven_Coliseum?oldid=182405"
Community content is available under CC-BY-SA unless otherwise noted.