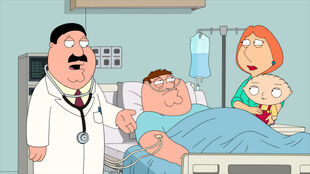 Peter in the hospital 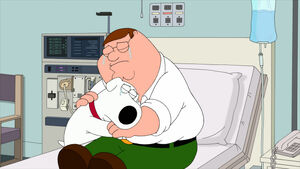 Exhausted from Brian keeping him awake at night, Peter is introduced to Red Bull by the guys. Completely wired, Peter looses all control forcing Lois to pour out all of the drinks. Determined to make his own Red Bull, Peter poisons himself on kerosene and destroys his kidney's forcing himself to undergo dialysis. After Peter blows off a treatment to watch Charles in Charge and passes out, the family becomes even more concerned about getting Peter a transplant. It turns out the only possible kidney donation can come from Brian but the procedure will kill him. Determined to make up to Peter for taking him, Brian agrees to the kidney transplant. Brian fails to keep the secret from Stewie and is kidnapped but manages to talk Stewie into letting him go. As they prepare for surgery, Dr. Hartman arrives prepared to undergo the transplant operation instead; it turns out he is a match for Peter. Dr. Hartman explains that it is unlikely that Peter would have survived the surgery either, as there were doubts that Brian's kidneys would function for Peter and he does not want to lose two patients. 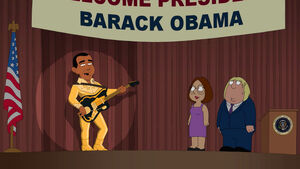 Meanwhile, Chris struggles to write an essay on "Hope" for English class for President Obama's arrival. Meg gives an inspiring speech on her interpretation of hope and Chris copies it to win the essay contest. Meg is furious that Chris won with her speech and no one will believe that it was hers. Overjoyed that their dad and Brian are both saved, they agree to present the essay to President Obama together.

Retrieved from "https://familyguy.fandom.com/wiki/New_Kidney_in_Town?oldid=216729"
Community content is available under CC-BY-SA unless otherwise noted.