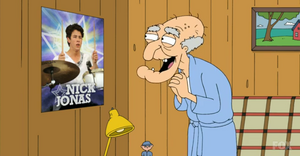 Nicholas Jerry "Nick" Jonas (born September 16, 1992) is an American singer-songwriter, musician and actor best known as one of the Jonas Brothers, a pop-rock band he formed with his brothers Joe and Kevin. He also starred in the Disney Channel original movie Camp Rock and Camp Rock 2: The Final Jam. In 2013, The Jonas Brothers broke up and the brothers pursued solo careers.

He is called cute by Peter Griffin in "The Juice Is Loose".

He appears in live-action on a poster on Herbert's wall in "Road to the North Pole", as the "little drummer boy" he wants for Christmas during the song "All I Really Want For Christmas".

Retrieved from "https://familyguy.fandom.com/wiki/Nick_Jonas?oldid=182731"
Community content is available under CC-BY-SA unless otherwise noted.