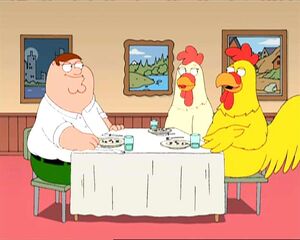 Nicole is the wife of Ernie the Giant Chicken. She appeared in "No Chris Left Behind" when she and her husband took Peter Griffin out to dinner after Ernie and Peter fight, and they realize they've both forgotten what the original fight was all about. Just as Peter and Ernie seemed to have resolved their differences, another fight ensues when both of them insist on footing the bill. She tries to stop the fight before it happens, but her pleas were useless.

When she discovers Ernie having coffee with Lois in "Follow the Money" and calls her a bitch, they get into a slap fight with each other.

Retrieved from "https://familyguy.fandom.com/wiki/Nicole?oldid=201345"
Community content is available under CC-BY-SA unless otherwise noted.