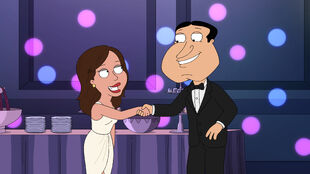 No Giggity, No Doubt
Quagmire discovers a long-lost daughter. 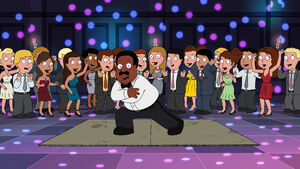 When the guys are preparing to go to a Patriots game, they find others getting ready to go to the game on a party bus. After riding along, they become hooked on party buses and soon crash others, including one that takes them to a dance at James Woods High School. There, Quagmire meets a girl and decides to take her back to his place. However, when they embrace, she lets out a giggity which alarms Quagmire. A paternity test determines that she is indeed his daughter and when he finds out that she's rooming in less-than-ideal conditions, he invites her to live with him. 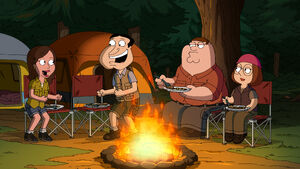 Quagmire quickly takes to being a father, and invites Peter and Meg for a weekend father-daughter camping trip. Peter is less than enthused, and his bad attitude soon rubs off on Quagmire who takes his frustrations out on everyone, especially Courtney since he never really wanted to be a father. Using a magnifying glass to look at a map, he accidentally sets it on fire and when he tosses it into the bushes, it sets the entire woods ablaze. Surrounded by flames Quagmire apologizes and promises that if they should survive, he'd start over with Courtney. Just then, they are rescued by firefighters who they partied with earlier in the episode.

Back home, Peter closes out the episode in the style of Seinfeld with a stand-up comedy routine on pillows that Lois purchased while he was away, although no one in the audience is interested.

Previous Episode /// No Giggity, No Doubt \\\ Next Episode

Retrieved from "https://familyguy.fandom.com/wiki/No_Giggity,_No_Doubt?oldid=212181"
Community content is available under CC-BY-SA unless otherwise noted.