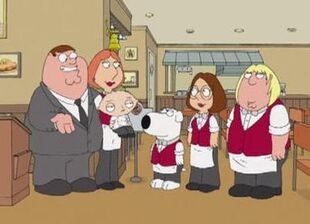 No Meals on Wheels
The Griffins open a restaurant, but have a hard time attracting customers. 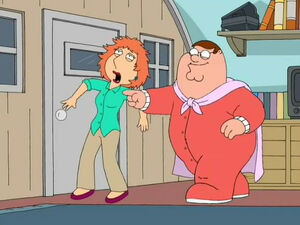 Peter is annoyed by Mort constantly borrowing his things, so he makes a “ScareJew” out of his best suit, which is actually a scarecrow modeled after Adolf Hitler. Furious, Lois takes him to a secondhand clothing store to get a new suit, where Peter finds some flannel pajamas. While wearing them, he begins to notice that he can shock people with static electricity by rubbing his feet on the carpet. Annoyed by this, Lois has the carpet completely removed. When this is done Quagmire finds an old coin under the carpet, which is sold for fifty thousand dollars. With the money, Peter and Lois decide to live their dream of owning their own restaurant, naming it Big Pete's House of Munch. 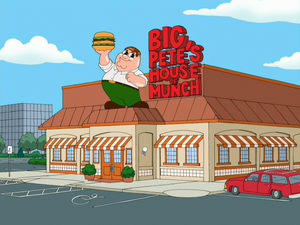 Previous Episode /// No Meals on Wheels \\\ Next Episode

Retrieved from "https://familyguy.fandom.com/wiki/No_Meals_on_Wheels?oldid=216359"
Community content is available under CC-BY-SA unless otherwise noted.