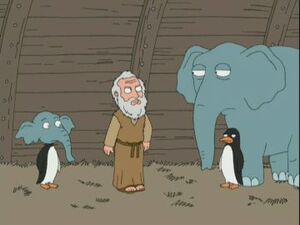 Noah was, according to the Hebrew Bible, the tenth and last of the antediluvian Patriarchs. The biblical story of Noah is contained in chapters 6–9 of the book of Genesis, where he saves his family and representatives of all animals from the flood by constructing an ark, bringing a male and female of each species aboard. He is also mentioned as the "first husbandman" and in the story of the Curse of Ham. Noah is the subject of much elaboration in later Abrahamic traditions.

In "You May Now Kiss the...Uh...Guy Who Receives", it is noted someone failed to specify exactly which males and females should breed. Noah says he will throw the resulting cross-breeds overboard, such as the elephenguin.

It is said by the announcer that even Noah wouldn't have put Adam Sandler together as brother and sister in Ben Him & Ben Her in "Jesus, Mary & Joseph".

Retrieved from "https://familyguy.fandom.com/wiki/Noah?oldid=222359"
Community content is available under CC-BY-SA unless otherwise noted.