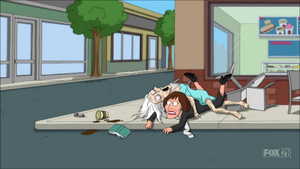 Nora Ephron (May 19, 1941 - June 26, 2012) was an American film director, producer, screenwriter, novelist, playwright, journalist, author, and blogger. She is best known for her romantic comedies and is a triple nominee for the Academy Award for Writing Original Screenplay for three films: Silkwood, When Harry Met Sally... and Sleepless in Seattle.

Nora is voiced by Melissa Villasenor.

Retrieved from "https://familyguy.fandom.com/wiki/Nora_Ephron?oldid=172451"
Community content is available under CC-BY-SA unless otherwise noted.