Not All Dogs Go To Heaven 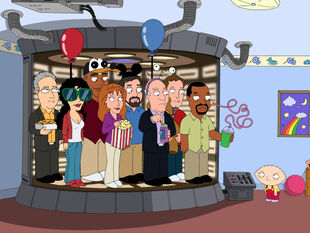 Not All Dogs Go To Heaven
Meg attempts to convert Brian to Christianity. 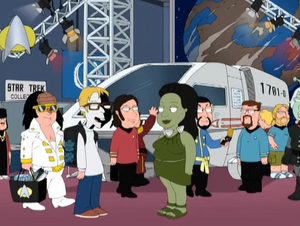 While at a Star Trek Convention, Meg is pushed into someone who has the mumps, and seeing as she hasn't been given a shot, is forced to lay bed-ridden until she's recuperated. Peter brings a television into her room for her to watch, which only gets one channel, the Religion Channel, where Kirk Cameron is preaching about the word of God. Meg is drawn in and soon strives to spread the word of God to everyone she knows. By attempting to convert Brian, she soon exposes that Brian is an atheist, and the family is shocked and appalled at this. Meg's repeated attempts to convert Brian are made futile and so she decides to uncover Brian's atheism to the media, where the townspeople treat him as a pariah. 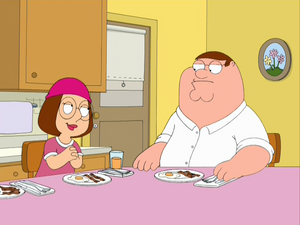 He soon finds he is unable to go outside without being abused, meaning he is restricted from entering any liquor stores and drinking. With Brian getting desperate for a drink, he feigns believing in God to get Meg to undo the social upheaval she has imposed on Brian. After his fill, she forces him to do "God's work" which is a book burning of any piece of literature that is blasphemous to religion, including Darwin, Hawking, and Logic For First Graders.

Brian convinces Meg through a harsh reality check, that if there were a God, would he have given her such a beautiful mother only to have her look like her father, or have her grow up in a family that doesn't care about her enough to get her a mumps shot. Meg realizes Brian is right, and he explains about what he thinks is the real nature of mankind's existence. In the end, the whole Family Guy universe is revealed to take place within a lampshade in the bedroom of Rob Lowe and Adam West.

In the mean time, while at the Star Trek convention, Stewie blows a fuse when he doesn't get a chance to ask the Star Trek: The Next Generation cast members any questions. He devises a plan, builds a transporter and beams the entire cast to his bedroom so they can spend a fun-filled day together in Quahog. He soon finds the entire cast insufferable, as they complain about the most trivial things, so he sends them back.

Previous Episode /// Not All Dogs Go To Heaven \\\ Next Episode