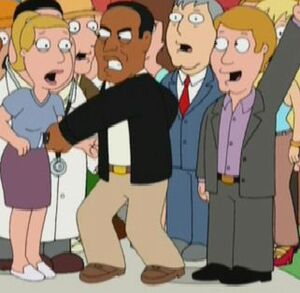 Orenthal James "O. J." Simpson (born July 9, 1947), nicknamed "The Juice", is a retired American football player, football broadcaster, spokesman, actor, and convicted felon. In his second career, as an actor, O.J. himself entered the world of movie comedy, notably taking the role of Officer Nordberg, in the movie The Naked Gun: From the Files of Police Squad! and its two sequels.

That was overshadowed by his 1994 high-profile trial and subsequent acquittal of the charge of murdering wife Nicole Brown Simpson and friend Ronald Goldman. He was, however, later found liable for damages in a civil suit filed by Goldman's father and the Brown family. In September 2007, Simpson was arrested in Las Vegas, Nevada, and charged with numerous felonies, including armed robbery and kidnapping. A jury found Simpson guilty of all charges on October 3, 2008 and he was sentenced on December 5 to 33 years imprisonment. He was granted parole in July 2017.

At the beginning of "Love Thy Trophy", a teaser introduction on Quahog 5 News claims, over pictures of O.J. playing golf and half removing his golfing glove, that evidence has been found to prove irrefutably that Simpson was innocent. No further details are given however.

According to a cutaway in "Peter Griffin: Husband, Father...Brother?", a drunken Stewie Griffin planted suspicions in Simpson's mind which could have led him to a murderous attack on the two.

The famous "low speed pursuit", in which Simpson attempted to evade arrest by reportedly forcing fellow football player Al Cowlings to assist his escape, in a white Ford Bronco SUV, is parodied in "Untitled Griffin Family History", where Nate Griffin and his family are shown escaping from the law, with the assistance of Al Cowlings and his trusty white bronco horse. The helicopter TV coverage of the Simpson/Cowlings pursuit is also referenced, as black ancestors of Tom Tucker and Diane Simmons report on the chase from a hot air balloon.

In a "No Meals on Wheels" cutaway, Brian and his black roommate react in entirely opposite ways; Brian in disbelief, the room-mate in pleasure as the Simpson acquittal verdict is announced on TV, causing Brian to suggest, as they both point guns at each other, that maybe they should find new roommates.

In the third segment of Stewie Griffin: The Untold Story, "Stu & Stewie's Excellent Adventure", the slogan on the Quahog Time Travel Vacations office is "Watch O.J. Do It", a reference to the supposed murder.

In "Long John Peter", Peter Griffin is shown emerging from the Brown-Simpson home, bloodstained, wearing one glove and carrying a bloodstained knife, just before O.J. arrives and enters, with the apparent intention of playing a game of Boggle. The former football player is then heard making a terrible discovery, presumably of two bodies, and speculating about what was going to happen, and what would now happen.

In "The Juice Is Loose", a disclaimer has to be made about the episode that places it in 2007, because Simpson had only been recently convicted of the robbery, and thus could not make it into the plotline. In the episode, Peter wins a game of golf with Simpson. After everyone tells Peter of O.J.'s history as a suspected murdered, he and his friends decide to try and trick Simpson into confessing. O.J, upon discovering Peter's intent, is hurt and begins to cry, causing Peter to change his opinion, and offers that O.J. Simpson comes to live with the Griffins. When the town begins to riot, O.J. makes a heartfelt speech that wins over the towns people. And then, for abruptly and for no apparent reason, he murders three Quahog residents and runs off, with Peter finally owning up to the truth.

Norm MacDonald mentions O.J. in his rant over the word "'Twas" in "Don't Be a Dickens At Christmas".

O.J., Judge Ito, Marcia Clark and Johnnie Cochran Jr. appear in a television gag during the recording of a DVD commentary by the Griffin family in "You Can't Handle the Booth!". As the scene progresses, they are joined by the Xenomorph and the Predator.

In "Island Adventure", Stewie and Brian try to catch up a group of castaways on O.J.'s murder trial.

In all speaking appearances, he is voiced by Mike Henry.

Retrieved from "https://familyguy.fandom.com/wiki/O.J._Simpson?oldid=211758"
Community content is available under CC-BY-SA unless otherwise noted.