Not to be confused with Opie, a similarly named character 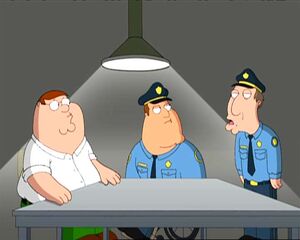 Obie is a police officer on the same police force as Joe. He first appeared in "Stewie Kills Lois". He is developmentally disabled. Joe claims he is extremely effective during police interrogations using "Good Cop, Developmentally Disabled Cop." He also appears in "Lois Kills Stewie" during the door-to-door search for Stewie and is part of the crowd control for the Veterans Parade in "Padre de Familia".

He also appears as one of several sidelined characters in the opening of "A Lot Going On Upstairs".

Retrieved from "https://familyguy.fandom.com/wiki/Obie?oldid=185514"
Community content is available under CC-BY-SA unless otherwise noted.