Ocean's Three and a Half 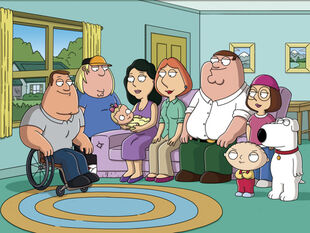 Ocean's Three and a Half
Bonnie finally gives birth to a girl, Susie. 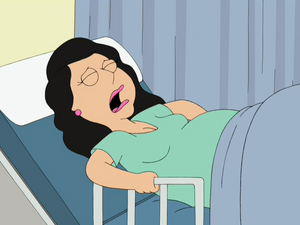 Frustrated that Joe is growing more concerned that Bonnie may give birth any day now, Peter attempts to induce labor so Joe will spend more time with him, Cleveland and Quagmire. As a result, Bonnie finally gives birth to her baby, a girl named Susie.

However, Joe is unable to pay the $20,000 dollars he needs for her medical bills. He turns to a loan shark for the money, but ends up in debt to him. He and the guys turn to Carter Pewterschmidt for the money to pay off the loan shark, but Carter refuses.

In one final act of desperation, Peter proposes they rob Carter. Once they reach the vault, however, Lois arrives on the scene and convinces Joe to stop. Lois talks Carter into providing the money, telling him she's using it for a divorce lawyer; when Peter asks her if she's joking, Lois says nothing, leaving Peter a little worried. 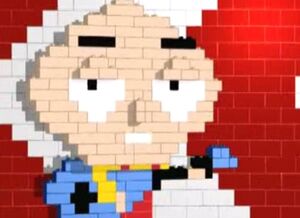 Meanwhile, Stewie falls in love with Susie and attempts to win her heart by writing songs and making a detailed music video featuring him singing a direct version of Bryan Adams' song "Everything I Do". Brian scoffs when Stewie announces that he's named his song named after Susie, the girl in whom he's interested. Challenged to name other songs named after girls, Brian lists numerous songs, frustrating Stewie. In the end, Stewie states he is over his crush and has an interest in Bryan Adams instead.

Previous Episode /// Ocean's Three and a Half \\\ Next Episode