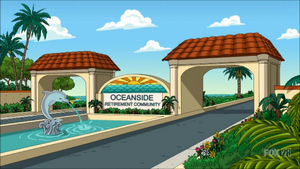 The Oceanside Retirement Community in Florida is where Carter and Barbara Pewterschmidt briefly retire in "Grumpy Old Man".

After being talked into retiring, carter becomes a burden on the Griffin family so they talk the Pewterschmidts into moving to a retirement community in Florida. Carter is at first reluctant until Peter shows him a good time and they decide to stay. Six months later Lois gets a call from her mother that there is something wrong with her father. The family rushes back down to Florida to find Carter listless and unresponsive. While Lois and Babs worry, Peter hits on an idea of taking Carter back to his office at Pewterschmidt Industries where he recovers.

Retrieved from "https://familyguy.fandom.com/wiki/Oceanside_Retirement_Community?oldid=166655"
Community content is available under CC-BY-SA unless otherwise noted.