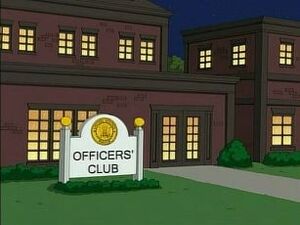 The Officer's Club is the site of the Naval ball held to honor Glenn Quagmire's father Dan Quagmire for his service in Vietnam in "Quagmire's Dad". When Glenn introduces Peter and Joe to him, two soon begin texting each other on their cell phones, and mutually imply that Quagmire's father is a homosexual. Deciding to confront him the next morning, Quagmire decides to invite Peter and Lois to the Naval Ball, as guests of his father. The two quickly begin arguing, however, with Quagmire left to imply that Peter is just jealous. Later that night at the ball, Quagmire is soon bombarded by comments about his father's sexuality from fellow sailors. Deciding to confront his father, Quagmire soon discovers that his father is actually a "woman trapped in a man's body," in desire of a sex change operation.

Retrieved from "https://familyguy.fandom.com/wiki/Officer%27s_Club?oldid=132343"
Community content is available under CC-BY-SA unless otherwise noted.