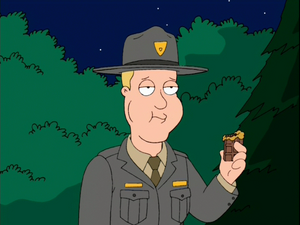 Officer Reeses is an ex-police officer who founded The Reeses Candy Company. The real founder was Harry Burnett Reese, a former dairy farmer.

"PTV" explores the origins of the idea for Reese's Peanut Butter Cups. One night while on duty, a chocolate-eating drunk man crashes his car with that of a peanut butter-eating drunk man. When the cars collide, so do the chocolate and peanut butter. Reeses goes to investigate the crash, when the two victims reveal that the chocolate and peanut butter have collided. Reeses samples the combination, realizes he can make money off of the idea, and shoots both victims dead.

Retrieved from "https://familyguy.fandom.com/wiki/Officer_Reeses?oldid=216828"
Community content is available under CC-BY-SA unless otherwise noted.