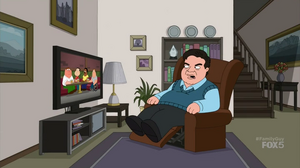 Oliver James Platt (born January 12, 1960) is a Canadian-born American actor, nominated for a Golden Globe Award, as well as multiple Emmy and Screen Actors Guild Awards for his work in films such as Married to the Mob, Working Girl and Flatliners.

In "Underage Peter", Joe notes that Peter looks like Oliver Platt climbing a flight of stairs after trying Cleveland's hot sauce. Oliver, watching at home, objects and threatens to call the network, but when he finds out from his wife that the phone is upstairs, brushes off retrieving it.

When Peter becomes fused to his couch after binging on television in "Are You There God? It's Me, Peter", Dr. Hartman shows him a video of Oliver Platt who experienced a similar fate.

Platt is voiced by Ralph Garman.

Retrieved from "https://familyguy.fandom.com/wiki/Oliver_Platt?oldid=209236"
Community content is available under CC-BY-SA unless otherwise noted.