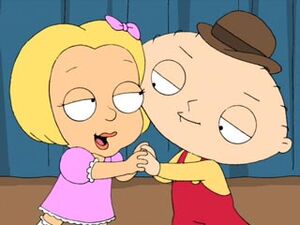 Olivia Fuller is the most famous toddler actress in Quahog. She was supposedly pressured by her mom at a young age to become an actress. Though she is an incredible actor and singer, Olivia is very stuck up and reluctant to work with those "less talented than her". However she managed to perform a popular duet with Stewie Griffin, entitled "You Do" in "From Method to Madness", for quite some time but eventually their rivalry led to their downfall.

In "Chick Cancer", Olivia returns to Quahog as her young career wanes. Stewie wants to humiliate her but instead falls madly in love. Using advice from Brian, he woos her. After a while, Olivia finally succumbs to his efforts and the two get "married".

However their old rivalry and Stewie's jealousy get in the way and Olivia ends up 'cheating' on Stewie with old friend Victor. As revenge, Stewie sets their cardboard house on fire with Olivia and her playmate inside.

When Olivia sees how popular Brian and Stewie's musical act is at a children's party in "The Boys in the Band", she plots at first to get Stewie to drop Brian. When he fails to do this, she manages to convince Brian to drop Stewie instead so she may take his place. But when Brian sees Stewie crying in the audience during a performance of one of his original songs, Brian dumps Olivia as well, although she takes ownership of the duo and replaces Brian with Vinny as the singing dog.

Olivia is voiced by Rachael MacFarlane.

Retrieved from "https://familyguy.fandom.com/wiki/Olivia_Fuller?oldid=200174"
Community content is available under CC-BY-SA unless otherwise noted.