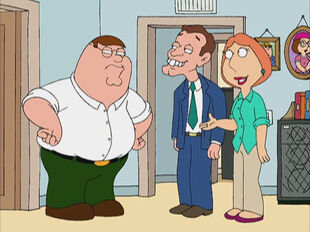 The British are a lovely people

One if by Clam, Two if by Sea
Horace sells the Clam to a British man who turns it into a pub.

Plot: Flashbacks at the beginning establish that Peter has been working at the toy factory and going to The Drunken Clam regularly since 1977. 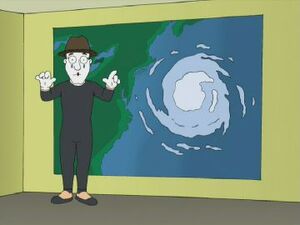 A hurricane convinces the Drunken Clam’s owner Horace to sell the bar, and an Englishman named Nigel Pinchley turns it into a British pub. Upset over the loss of their favorite bar, Peter and friends storm a British ship in an attempt to recreate the Boston Tea Party with beer.

When the pub mysteriously burns down that night, Peter, Quagmire, Cleveland, and Joe are thrown in jail. Lois plans to trick Nigel into confessing that he torched his own pub for the dual goals of insurance money and to send Peter to jail, intending to have Bonnie and Loretta as witnesses. However, they were not there when he admits his crimes, but the representative of the insurance company was in his closet by coincidence and overheard everything. 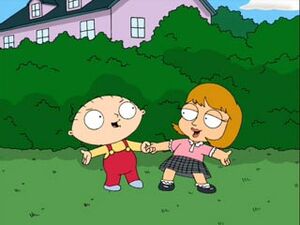 Meanwhile, Stewie tries to teach Eliza Pinchley, Nigel’s daughter, to overcome her “common” Cockney accent and speak “proper” English. He wagers with Brian that she will be a proper lady at her birthday party. At first, Stewie's efforts to improve her pronunciation are in vain, but eventually Eliza "gets it". At the birthday party, Eliza does admirably, until she wets herself in front of everybody.

After her father is hanged, Eliza gets sent to a rat-hole orphanage and sends Stewie a letter threatening to kill Lois if she gets out. Stewie enjoys reading her letter.

Previous Episode /// One if by Clam, Two if by Sea \\\ Next Episode

Retrieved from "https://familyguy.fandom.com/wiki/One_if_by_Clam,_Two_if_by_Sea?oldid=217386"
Community content is available under CC-BY-SA unless otherwise noted.