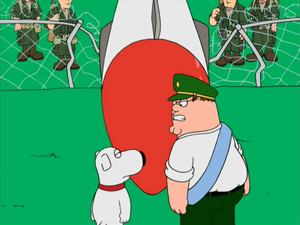 Operation Desert Clam was the name given to the military conflict fought between the nations of Petoria and the United States of America that began and ended in "E. Peterbus Unum". Following Petorian Preident Peter Griffin's invasion of Joe's property, renamed "Joehio" on the advice of an Iraqi diplomat, the United States began a siege on the country. They did so accepting this as an invasion of US soil. This cut off water, gas, and electricity supplies to the small nation. After the nation's citizens, being First Lady and wife Lois Griffin, children Chris, Meg and Stewie surrendered, the United States forced Griffin into negotiations, thus ending the war.

Retrieved from "https://familyguy.fandom.com/wiki/Operation_Desert_Clam?oldid=161063"
Community content is available under CC-BY-SA unless otherwise noted.