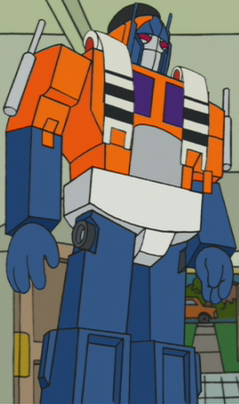 Optimus Prime is the leader of the heroic Autobots who wage war against the villainous Decepticons led by Megatron in the Transformers franchise.

He makes an appearance in the episode, "When You Wish Upon a Weinstein" at the Temple Beth Thupporting Actor where it is revealed that he is Jewish.

He is also in the Robot Chicken universe in "Road to the Multiverse".

He appears as one of Stewie Griffin's toys, along with Trapjaw and Destro, in "April in Quahog".

Chris Griffin dresses like Optimus Prime for a Halloween party in "Halloween on Spooner Street", forced to change from his Bill Cosby costume.

Brian tries to join Stewie playing with his toys of the Transformers and He-Man with Scotty Jennings in "Livin' on a Prayer", unaware of who the characters are. Stewie becomes upset when he wants to involve the two groups of toys together.

Retrieved from "https://familyguy.fandom.com/wiki/Optimus_Prime?oldid=137696"
Community content is available under CC-BY-SA unless otherwise noted.