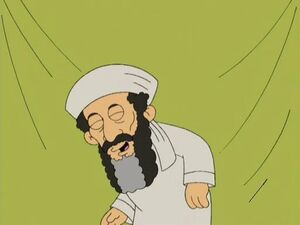 Osama bin Muhammad bin Awad bin Laden, widely known as Osama bin Laden (1957-2011), was a Saudi Arabian militant islamic extremist. He is thought to be the leading figure in the instigation and planning of the September 11, 2001 attacks, and was a prime target of the "War Against Terror".

On May 1, 2011, the U.S. had confirmed that bin Laden is dead. DNA, witnesses, and the physical body has confirmed this.

In the uncensored version of "Road to Rhode Island", bin Laden is seen attempting to evade airport security by singing "I Hope I Get It", as Stewie Griffin has just successfully done with "On the Good Ship Lollipop". This scene was removed after 9/11 and is only available in the Family Guy: The Freakin' Sweet Collection.

In "PTV", bin Laden is seen cracking up whilst attempting to record a threatening video message to the USA. After considerable dialogue and banter amongst the co-conspirators, Stewie is revealed to be present and he proceeds successfully to attack all the al-Qaeda operatives, including bin Laden. This introduction, as well as the following title sequence, is an extended parody of the opening and titles of the film The Naked Gun: From the Files of Police Squad!.

Bin Laden is also briefly mentioned in "Peter's Daughter" when a suicide bomber arrives in Paradise to discover the 72 virgins awaiting him are all male nerds and geeks. He yells for Osama as he realizes he has been tricked.

In "Boys Do Cry", he is seen in a picture with George W. Bush.

In "Meet the Quagmires", it was revealed that in an alternate time line, he was killed by President Al Gore with Gore's bare hands when he found bin Laden hiding out in the cast of MADtv in the year 2007A if Peter Griffin never married his wife, Lois.

A photograph of bin Laden appears in "Road to the North Pole" as one of the voices in Meg Griffin's head during "All I Really Want For Christmas".

According to Abortion Madness!, the anti-abortion video from "Partial Terms of Endearment", bin Laden's older brother was aborted. Judging by his description, if he had lived, he would've influenced Osama enough to at least tolerate America.

Osama appears out of the sand on Tatooine in the DVD version of It's A Trap!, declaring that he was still alive before his death in May 2011. The scene was cut from the broadcast premier later that month.

Osama takes advantage of being forgiven for his sins immediately prior to his death and gets into Heaven in "Mom's the Word".

Vic, a former navy seal in "Brokeback Swanson", has anger issues as he actually killed Osama, but didn't get credit for it. To free Brian, Stewie and Chris introduce Vic to Vice President Joe Biden, who thanks him for killing the man they "told him" was Osama.

In "Inside Family Guy", SEAL Team Six used the Petercopter on their mission to kill Osama.

Retrieved from "https://familyguy.fandom.com/wiki/Osama_bin_Laden?oldid=195365"
Community content is available under CC-BY-SA unless otherwise noted.