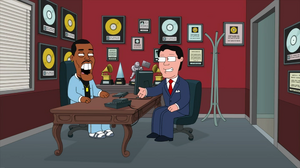 In "Total Recall", Stewie complains that the stuffed giraffe's mouth hangs open like P. Diddy's. Brian points out that P. Diddy hired a guy to close his mouth for him. A cutaway gag shows the helper arriving late after getting caught in traffic.

Retrieved from "https://familyguy.fandom.com/wiki/P._Diddy?oldid=197036"
Community content is available under CC-BY-SA unless otherwise noted.