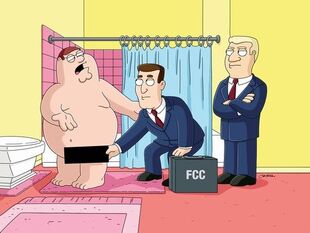 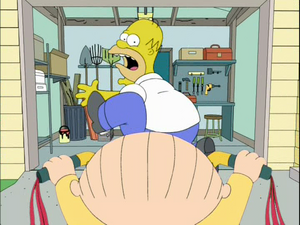 After preventing Osama bin Laden from sending a hostile message to the United States, Stewie rides off on his tricycle, cycling through scenes from various movies and video games, eventually arriving at his house where he runs over Homer Simpson.

Peter is very excited about watching the Primetime Emmy Awards; however, Lois tells him that he has to attend Meg’s play. Peter voices his frustration and is forced to go. At Meg’s play, Peter tries many ways to watch the Emmys, even trying to convince Lois to leave early, but he fails.

Back at home, the news anchors are reporting that after a “trouser malfunction,” David Hyde Pierce revealed his testicles. Peter is outraged that he “missed a moment in television history.” In the Federal Communications Commission building, the Board of Commissioners are discussing what to do about the David Hyde Pierce incident. Their Chairman, Cobra Commander from G.I. Joe, tells them that they have to censor television. 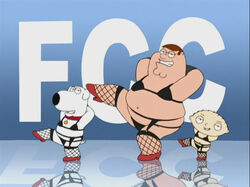 The FCC gets to work on television shows, cutting out anything that might be deemed inappropriate, including bikinis on Three's Company, Ralph Kramden’s threats of spousal abuse on The Honeymooners and even Dick van Dyke’s name. Peter is enraged, and swears to fight the ban. With advice from Tom Tucker, Peter starts his own television network called PTV. He broadcasts classic shows in their original, unedited versions, as well as original programming.

Lois is upset about Peter’s obscenity in his shows. She calls the FCC, prompting Peter, Brian, and Stewie to perform an elaborate musical number about how insane the FCC’s regulations are. The song ends with Peter, Stewie and Brian in travestial outfits.

The FCC shut down PTV. After Peter tells the FCC that they can’t stop people from being who they are, they take on the challenge. The FCC start to censor any foul language and inappropriate behavior in Quahog; all expletives are bleeped with an air horn, and audible farts are banned in public. After being prevented from having sex due to the indecency laws, Lois eventually concedes that Peter was right, and they both lobby Congress to have the FCC’s rulings reversed. At first they resist, but they relent when Peter points out the resemblance of many Washington area buildings to various naughty body parts.

The oppression of the FCC is gone, and the family settles down to watch an episode of the The Brady Bunch that features a poop joke.