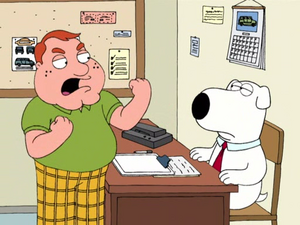 Paddy Tanniger was a short, annoying man who was a recurring character on Family Guy.

He first appears in "Fore Father" as the caddy manager at the local golf course. Whenever he states a fact, he follows the sentence by saying: "Big whoop, want to fight about it?"

In "The Perfect Castaway" he is employed at the Quahog Hummer Dealership where Brian has become employed, to support his new wife Lois and the family, following Peter's presumed death at sea.

He was also seen in the after party in Stewie Griffin: The Untold Story where he pointed out that the movie sucked.

In "Hell Comes to Quahog", Brian and Stewie, in their effort to save Quahog from Superstore USA, run Paddy over with a tank. It is mentioned on the DVD commentary for "The Perfect Castaway", that the character is disliked by nearly all the writing staff, hence his death.

Retrieved from "https://familyguy.fandom.com/wiki/Paddy_Tanniger?oldid=228015"
Community content is available under CC-BY-SA unless otherwise noted.