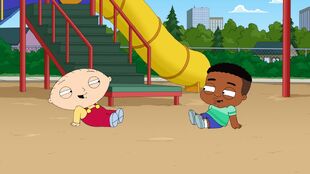 Pal Stewie
Stewie gets burned by his new friend.

Plot: While trying to assassinate Lois with a drone, another boy named Hudson interrupts Stewie and stops his plot. They quickly become friends and when Stewie shows him his weapons collection as part of his attempts to kill his mother, he is convinced to give up his plans so that they can stay friends and buries his weapons. But at preschool, Stewie discovers that he's the only one who did not receive an invitation to his birthday party at the Family Fun Zone and decides to get revenge. 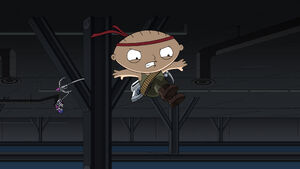 Stewie manages to knock out all of the other children at the party and confronts Hudson where he discovers that he did receive an invitation but never responded back. Brian arrives after discovering the plot and reveals that he destroyed the invitation because he didn't want to lose his own friendship with Stewie because it appeared he had been pushed aside for Hudson as Stewie points out that they are more than friends in being family. 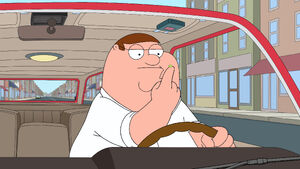 Meanwhile, Lois drags Peter to a self empowerment seminar hosted by Tony Robbins. When Tony becomes too uncomfortable in his insistence in helping Peter, he and Lois try to leave but Tony follows them out to the car where he is struck by lightning, although his body vanishes. Peter later hears Tony's voice in his car where he is told that his spirit is now inhabiting it and will help Peter become more assertive. Peter stands up for himself and becomes a new man, but finds that Tony has actually been still alive and helping him from the trunk of his car.

When Stewie tries to get involved with Brian at home, he gets angry when Brian hasn't any plans but perks up when he offers to go out for ice cream. Tony ends the episode with a plug for a speaking engagement.

Retrieved from "https://familyguy.fandom.com/wiki/Pal_Stewie?oldid=216304"
Community content is available under CC-BY-SA unless otherwise noted.