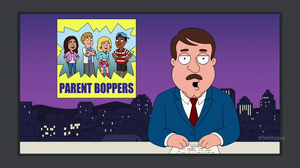 Parent Boppers is a fictional teen detective show on the Disney Channel that stars Dylan Flannigan, Cameron, Dakota and an unnamed girl.

In "Brian's a Bad Father", the show comes to Rhode Island to film. Brian is at first reluctant to visit with his estranged son Dylan. When he discovers Dylan has achieved television success, he quickly rushes to Dylan and asks him to use his contacts to help him secure a gig as a writer on the show. However, Brian soon alienates the other members of the production team by creating pretentious words and encourages the young stars to alter their own dialog in an overly-dramatic fashion such as Dylan threatening to shoot himself and Dakota punching her seventh-grade self in the stomach to induce abortion at a volleyball game. Brian is fired from the show and his begging for Dylan to intervene makes him realize that Brian only cares about his connections, rather than himself. When Brian finally realizes what he has done, and tries to apologize, he finds himself barred from the studio. Stewie comes to his aid by dressing up as super-cool teen Zac Sawyer, and after landing a place on the show, delivers a message of parental love and Dylan and Brian reconcile.

Retrieved from "https://familyguy.fandom.com/wiki/Parent_Boppers?oldid=225322"
Community content is available under CC-BY-SA unless otherwise noted.