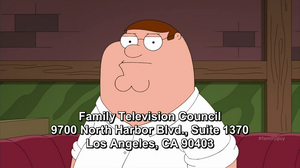 The Parents Television Council (PTC) is a non-profit entertainment watchdog group whose stated goal is to "promote and restore responsibility to the entertainment industry."[1] One of the group's major goals involves advising parents of television programming it deems either helpful or harmful to children, achieving this through a variety of means including online reviews, research reports and newsletters. In addition, the PTC is involved in campaigns and lobbying efforts on a number of different initiatives, including allowing families to choose and pay for only the cable channels they want, holding advertisers accountable for television programs they sponsor, and other means to raise awareness on television programs and suitability for families.

The organization was founded in 1995 by L. Brent Bozell III, a conservative activist and president of the Media Research Center. Tim Winter is the group's current president.

Since the premiere of Family Guy, the PTC has been an outspoken critic of the series. The series has been given a "red light" rating by the PTC due to violence, language and sexual situations. In its assessment of the series, the PTC said, "Although the show is intended to be a satire of the American family, it depends heavily on oblique sexual innuendo and sexual themes such as incest, bestiality and pedophilia." Continuing on, the PTC stated: "Language is a major issue, with words such as 'ass,' 'douche' and 'bitch' used in almost ever episode. Anatomical references are commonplace."[2]

Episodes that mock religion either directly or in cutaway gags are also frequent PTC points of criticism, particularly if they portray God and Jesus Christ; two deities central and core to Christianity; in a negative, sacrilegious way. For instance, "The Courtship of Stewie's Father" was named "Worst TV Show of the Week" in part due to a gag that depicted God as a dirty old man having sex with a prostitute all while brushing off a teen-aged Jesus, who was seeking some help with his quarrel with Joseph.

Since 2005, the PTC has deemed Family Guy the "Worst TV Show of the Week" on at least 40 occasions, with at least 42 episodes so designated; many of the awards came following original broadcasts, while the others were based on repeat airings.[3][4] In addition, a live-action special hosted by series creator Seth MacFarlane and fellow voice actress Alex Borstein titled "Family Guy Presents: Seth & Alex's Almost Live Comedy Show" also was named "Worst TV Show of the Week" by the PTC due to what it said was "disgusting sex jokes, crass Holocaust humor, cruel impersonations of deaf people, and loads of bleeped profanity."[5]

Family Guy made the PTC's 2000, [6] 2005 [7] and 2006 [8] lists of "worst prime-time shows for family viewing," citing several episodes each season as "Worst TV Show of the Week." The PTC often points out that the series is among the most popular among children ages 2–12 due to the animated format, despite the shows' producers claim that the series is suitable only for adults.[9]

On at least five occasions, the PTC has filed complaints with the Federal Communications Commission because of the content of episodes. The episodes in question were:

The FCC denied the complaint regarding "And the Wiener is..." The FCC, in its decision, noted that "although the word 'penis' and euphemisms for that word are repeated several times in the episode, we find that because of the absence of explicit or graphic descriptions or depictions of any sexual organ, along with the absence of shocking, pandering, and/or titillating effect, the episode, taken as a whole, is not patently offensive as measured by contemporary community standards for the broadcast medium and is therefore not indecent."[15] In the case of "Brian & Stewie," the PTC asked the FCC to investigate the show.[16] Also following the airing of "Brian & Stewie," PTC president Tim Winter told the media, "It seems as though Family Guy creator, Seth MacFarlane, carefully reviewed the legal definition of broadcast indecency and set out to violate it as literally as he could.[17]

To date, the FCC has not taken action on the complaints regarding "Family Gay", "Business Guy". "Brian & Stewie" or "A Fistful of Meg".

MacFarlane, whose other series American Dad! and The Cleveland Show have also been criticized by the PTC, has fired back on several occasions. In a 2008 interview with the magazine The Advocate[18], he said:

"Oh, yeah. That’s like getting hate mail from (Adolf) Hitler. They’re literally terrible human beings. I’ve read their newsletter, I’ve visited their website, and they’re just rotten to the core. For an organization that prides itself on Christian values — I mean, I’m an atheist, so what do I know? — they spend their entire day hating people. They can all suck my dick as far as I’m concerned."

The episode "PTV" was a satirical response to the PTC's criticism and other attempts by the FCC to censor television. The PTC considered filing a complaint with the FCC over the episode's content.[19][20]

Peter directs people to complain to the "Family Television Council", a thinly disguised reference to the PTC in "The 2000-Year-Old Virgin".

In 2015 after "Our Idiot Brian" aired, the PTC again called out Seth for the double penis joke that ended the episode. He then offered PTC President Winter a chance to either write an episode himself, or designate two writers of his choosing for the task. The surprising offer stunned Winter, and after much communication in which Seth also heard genuine concerns from the group, the two have buried the hatchet.[21]