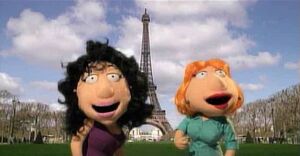 Paris is the capital and largest city in France, situated on the river Seine, in northern France. The city of Paris, within its administrative limits largely unchanged since 1860, has an estimated population of 2,193,031 (January 2007), but the Paris metropolitan area has a population of 11,836,970 (January 2007), and is one of the most populated metropolitan areas in Europe.

in "Foreign Affairs", Bonnie invites Lois along on a trip to Paris although Lois regrets it once she finds out Bonnie's intent is to have an affair. Lois is able to talk Bonnie into some Muppet-style sightseeing. While as Muppets, the visit the Louvre, Arc de Triomphe and the Eiffel Tower.

In "Leggo My Meg-O", Meg's friend Ruth invites her to study for a semester but while there the two are kidnapped and Brian and Stewie are forced to launch a rescue.

Retrieved from "https://familyguy.fandom.com/wiki/Paris,_France?oldid=168052"
Community content is available under CC-BY-SA unless otherwise noted.