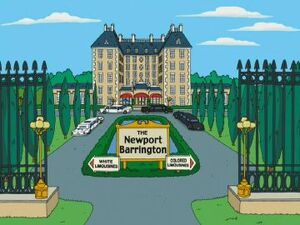 The Park Barrington Hotel is a fictional hotel chain.

In "North by North Quahog", Peter and Lois Griffin stay here hoping to rekindle their marriage. He tells her that Mel Gibson has a permanent suite on reserve and he thinks he can get into it by impersonating Mel. In another scene Tricia Takanawa is standing outside doing a report for Quahog 5 News and attempts to enter the hotel, however the Park-Barrington does not allow Asian people. She is told to go out by an usher when she tries to enter.

The hotel was also seen in "Bango Was His Name Oh", when Stewie and Brian arrive in San Francisco in a bid to search for his father.

In "Bill and Peter's Bogus Journey", this is the hotel where Lois and Bill Clinton spend the night together. It is also where Brian slept with Lauren Conrad in "We Love You, Conrad".

The Griffins eat out at the Park-Barrington everyday until the money runs out after winning the lottery in "Lottery Fever".

The Newport, Rhode Island branch is called The Newport Barrington.

Peter tries to stop Lois from sleeping with Jesus at the Park Barrington in "The 2000-Year-Old Virgin".

Peter and Lois ruin Karen's daughter's wedding by having the groom stabbed at the reception at the Park-Barrington in "Roasted Guy".

Retrieved from "https://familyguy.fandom.com/wiki/Park-Barrington_Hotel?oldid=205676"
Community content is available under CC-BY-SA unless otherwise noted.