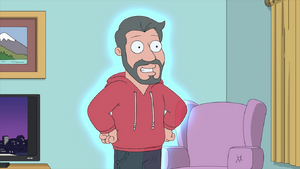 Parker Stanton is the CEO of "Boop", the most powerful company in the Silicon Valley.

In "HTTPete" he becomes so impressed with Peter's attempts to bring the Pawtucket Pete to the awareness of millennials that he appears in the family living room via hologram to invite them to the Valley to show them what the next big thing will be.

Parker is voiced by Chris Diamantopoulos.

Retrieved from "https://familyguy.fandom.com/wiki/Parker_Stanton?oldid=204751"
Community content is available under CC-BY-SA unless otherwise noted.