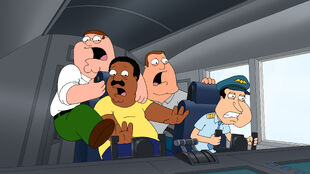 Passenger Fatty-Seven
The guys come to doubt Quagmire's abilities as a pilot. 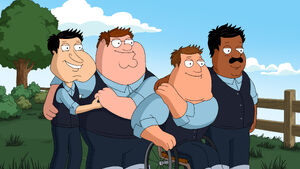 After Quagmire mentions taking his mother along on a flight, he invites the guys to join him on a trip to San Francisco. But on the flight back, he invites them into the cockpit and they come away with the impression that flying isn't as hard as Quagmire makes it seem. But when the co-pilot steps outside to use the restroom, the flight is hijacked. 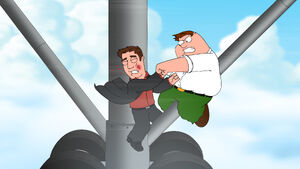 The co-pilot manages to close the cockpit door so the hijackers threaten to execute passengers. As Peter is the first one chosen, Joe and Cleveland slips below to the cargo hold to locate a gun in Joe's bag. Their disappearance is noticed and Peter and his hijacker investigate. Joe opens the landing gear hatch, leaving Peter to tussle until Cleveland knocks off the terrorist by throwing a piece of luggage. Returning to the cabin, they knock out the other hijackers, but as Quagmire unsecures the cockpit, a fourth hijacker reveals himself and takes him at gunpoint, intent on smashing the plane into Las Vegas.

As the hijacker settles in, Quagmire notices he doesn't have his seat belt secured. Discretely signaling for the cabin to buckle up and doing so himself, he rolls the plane, knocking out the hijacker and the passengers as well, as they failed to heed instructions. However, with communications disabled, military jets are sent to takeout the plane and Peter's attempt to wave with one of the hijacker's guns result in their being attacked. Quagmire dodges the missiles for a time, and when the plane is finally struck, safely lands in a canyon as everyone is reassured of his flying abilities.

Retrieved from "https://familyguy.fandom.com/wiki/Passenger_Fatty-Seven?oldid=212482"
Community content is available under CC-BY-SA unless otherwise noted.