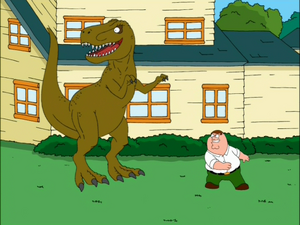 Patches was a pet Tyrannosaurus Rex that Peter Griffin was coerced into buying in the episode "Bango Was His Name Oh", which is the second segment of Stewie Griffin: The Untold Story. In it, Peter tried to get Patches to fetch a stick, but the dinosaur ended up bringing back a human, prompting Peter to yell at him.

Retrieved from "https://familyguy.fandom.com/wiki/Patches?oldid=146702"
Community content is available under CC-BY-SA unless otherwise noted.