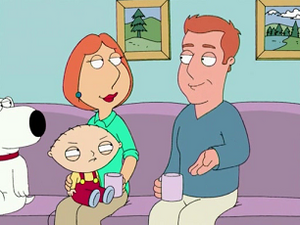 Patrick Pewterschmidt is Lois Griffin’s long lost older brother and son of Carter and Barbara Pewterschmidt. He was locked away in the Brookfield Insane Asylum by his parents, after he walked in on his mother performing oral sex on Jackie Gleason. He had a nervous breakdown and was sent to Brookfield, where he came to the conclusion that Gleason was evil because he was fat, leading him to hate fat people.

Ever since then, Patrick's father kept Lois's brother a secret from her for 30 years, until she found out about him, decided to release him from the institution.

During his temporary release from the mental institution, he became a serial killer known as the Quahog Fat Guy Strangler, strangling fat guys to death. Many, if not all of his victims were members of the National Association for the Advancement of Fat People. He nearly killed his own brother-in-law Peter Griffin. He has an invisible/imaginary wife named Marian Pewterschmidt.

Patrick was later imprisoned back in the mental institution, but it is mentioned that the Griffin family visit him once a month.

Patrick was introduced in "The Fat Guy Strangler" and is voiced by Robert Downey, Jr.. Young Patrick is voiced by Max Burkholder.

Patrick reappears in "Killer Queen" as he is wrongly accused of strangling more overweight people and is soon found innocent. He later helps by giving Peter clues to the case of a mysterious serial killer who targets overweight children with the intention of killing Chris. However, when Joe starts to apologize to him for accusing him, Patrick disappears. This time Patrick is voiced by Oliver Vaquer.

Retrieved from "https://familyguy.fandom.com/wiki/Patrick_Pewterschmidt?oldid=201861"
Community content is available under CC-BY-SA unless otherwise noted.