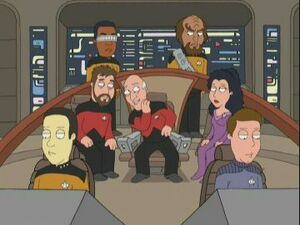 Sir Patrick Hewes Stewart, OBE (born July 13, 1940) is an English film, television and stage actor, and university Chancellor. He has had a distinguished career in theatre and television for around half a century. He is most widely known for his television and film roles, as Captain Jean-Luc Picard in Star Trek: The Next Generation and as Professor Charles Xavier in the X-Men films.

He reprised his role as Captain Picard in "Peter's Got Woods".

He also played himself in "Not All Dogs Go To Heaven", and reprised his role as Avery Bullock from American Dad! in Lois Kills Stewie.

Peter Griffin and Stewart exchanged vocal chords in "No Meals on Wheels". Though he did not appear, it is implied he would be voiced by Seth MacFarlane.

In the DVD version of "FOX-y Lady", Stewart stars in the Woody Allen movie Bananas Over Broadway in a role written for Allen himself.

Stewart also voiced a talking cat in "And Then There Were Fewer", Richard "Dick" Pump in "Halloween on Spooner Street" and Susie Swanson in "The Hand That Rocks the Wheelchair", "Thanksgiving", "Internal Affairs", and in "Joe's Revenge".

Stewart narrated the closing scene in "Vestigial Peter", revealing that Chip had joined the cast of "The Middle".

Patrick provides the voice of a water bear in "Big Trouble in Little Quahog".