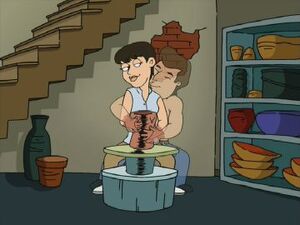 Patrick Wayne Swayze (August 18, 1952 – September 14, 2009) was an American actor, dancer and singer-songwriter. He was best known for his tough-guy roles and as a romantic leading men in the films Dirty Dancing and Ghost and in the North and South television miniseries.

In "The Story on Page One", Peter Griffin is a Ghostbuster in a flashback and interrupts the famous potter's wheel scene in the film Ghost and sucks up Swayze. "Baby Not On Board" also reenacts the pottery wheel scene while Peter is getting a massage.

He also appears in "Padre de Familia" with a more realistic ending to the film Dirty Dancing where his character is arrested for dating an underage girl.

"Brian's Got a Brand New Bag" is dedicated to him. The first act heavily references his films Road House, which airs on the Griffin television at the start of the episode, as well as Ghost.

Peter falls asleep after watching a Patrick Swayze Christmas movie and dreams he is visited by Patrick's ghost in "Don't Be a Dickens At Christmas". Here, Patrick is voiced by Swayze's younger brother, Don Swayze.

Peter is arrested for giving Mr. Henderson and Mrs. Henderson a Road House kick to the head in order to take Brian back in "Who's Brian Now?", but is arrested by Joe. and his trial he lucks out when the entire jury is made up of Patrick Swayze.