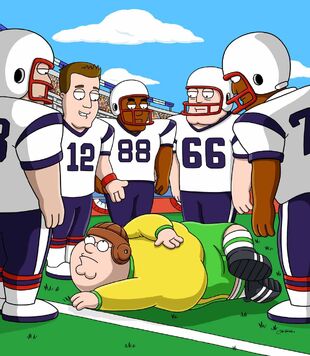 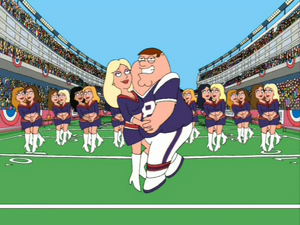 At Peter’s high school reunion, Peter pretends to be a secret-agent astronaut millionaire to impress his classmates, but the truth comes out when he meets Tom Brady and loses all self-control. Peter makes a drunken run for the bathroom, knocking over everyone between him and the toilet. Brady is impressed and lands Peter a spot on the New England Patriots football team as the starting center. Life is great for the Griffins but Peter's continual showing off after scoring touchdowns becomes more and more irritating for the team. After scoring yet another touchdown in a game, Peter 'showboats' by leading the entire stadium in a rendition of a grand musical number. Peter's showy musical number is the final straw for the team and he's sacked for showboating. The only team which will take him from the Patriots is the British team the 'London Sillinannies'.

Peter and his family fly to England and settle in a typical London 'flat'. Peter is disgusted to discover they are a bunch of 'softies' but decides to turn them around and stages a game between the Silly Nannies and the Patriots. Peter tries to improve the team by giving them all steroids but the most aggression they show is to have a pillow fight while dressed in nightshirts. When the game begins, the Patriots cause his team to run away, leaving Peter facing the Patriots alone. He attempts to play, but he is overwhelmed and defeated. However, Tom Brady compliments Peter on having the nerve to stand up to them. 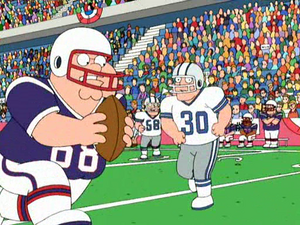 Meanwhile, Stewie becomes a sports bookie. After Brian loses $50 betting on Mike Tyson to beat Carol Channing on Celebrity Boxing, Brian procrastinates in paying off the bet. Because of this, he’s savagely beaten by Stewie in the bathroom. Some time later, Brian still hasn’t paid up, and he tries to avoid Stewie by disguising himself with a fake mustache. Stewie sees through his disguise and pushes Brian down the stairs, beats him with more force, culminating with Brian getting shot in both legs and being set on fire. They go to the bank and he settles the debt. While on the plane to England, Stewie offers “one free revenge shot” to make up for it. Brian leaves him in suspense as to when the free hit will be delivered, until Stewie is overcome with paranoia and starts beating himself up in an attempt to satisfy Brian.

At the very end of the episode, Brian pushes Stewie in front of a moving London bus.