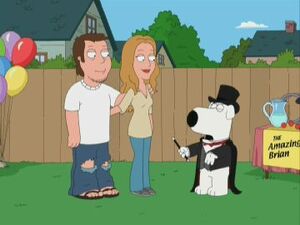 Paul is the boyfriend of Jared's mother. Brian tried to hook up with Paul's girlfriend in "The Former Life of Brian", not knowing she was already in a relationship until she mentioned him. Paul reveals he is unemployed and totally useless in the relationship but it makes his girlfriend feel useful. She happily adds that she can fix him. He was voiced by Chace Crawford.

Retrieved from "https://familyguy.fandom.com/wiki/Paul?oldid=213410"
Community content is available under CC-BY-SA unless otherwise noted.