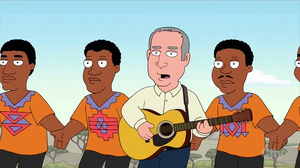 When Peter is held prisoner by African villager's on orders from Carter Pewterschmidt in "Scammed Yankees", he writes his memoirs and sends a chimpanzee to take them to civilization, where they cross paths with Paul Simon who turns them into a song. Lois hears about the song on television and sets out for Africa for both Peter and Carter.

When Peter brags about being a natural leader and being in charge of "Simon says" in "The Peter Principal", it sets up a cutaway of Peter enforcing Paul's instructions to kick Art Garfunkel out of their band.

Retrieved from "https://familyguy.fandom.com/wiki/Paul_Simon?oldid=194463"
Community content is available under CC-BY-SA unless otherwise noted.