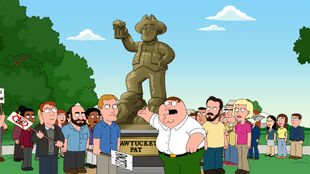 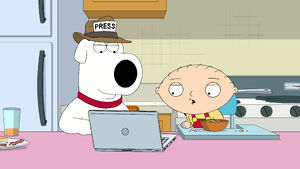 When Brian gets a job as an online journalist, he becomes desperate for a story when Stewie keeps exposing all of his work. going down to the Quahog Historical Society to peruse town hero and brewery founder Pawtucket Pat's records, he discovered that he stole the beer recipe from local Native Americans and killed them. His story splits the town over taking down the statue honoring Pat and angers Peter, who supports keeping the statue. Brian takes the opposite view but finds he can't get support to take it down. Frustrated, he decides to take action with Stewie along, but ends up tearing his car in half with the statue rolling into a nearby river. 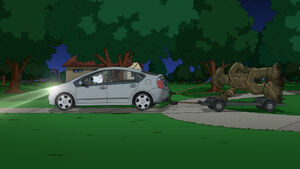 Despite the setback, Brian's actions still have the desired result although Stewie is afraid when Brian mentions that they could go to jail if caught. The opposing town forces nearly come to blows when they are stopped by the Narragansett Native Americans, who make them aware that there are bigger issues than just a statue. After getting everyone to apologize, Lois tries to drive the family home, but can't because the statue isn't there for her to navigate by.

In the end, the statue is found in the river, and is given a new place of honor in the local museum where no one will ever see it again. The family begins to speculate on their chances of winning an award for the episode, noting that Peter's right-wing attitude changed for the better. They then begin to wonder if there's ever been a plot that involves a misguided left-wing position that needed changing and they are unable to think of one. The spooky clerk from the Quahog Historical Society pops up from behind their couch and suggests Fritz Lang's Metropolis, but his presence unnerves Peter.