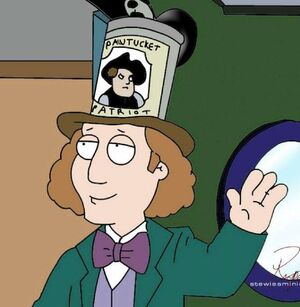 Not to be confused with the episode of the same name

In "Wasted Talent", he held a Silver Scroll contest for four lucky people who would win a tour of his factory. However, he ends up giving Joe Swanson a quick exit as he does not have a handicapped entrance and kicks out Peter and Brian after they sample his secret recipe beer that never goes flat and float to the ceiling until they fart their way back down to the ground.

In "Jungle Love", Peter mentioned that Pat sold the Pawtucket Brewery. In that episode, Peter began working at the brewery.

Retrieved from "https://familyguy.fandom.com/wiki/Pawtucket_Pat_(Character)?oldid=218908"
Community content is available under CC-BY-SA unless otherwise noted.