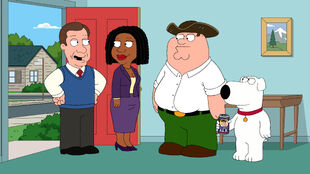 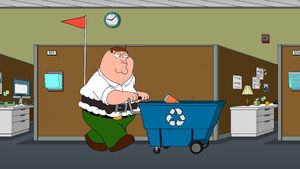 Following the death of Angela, the brewery hires an interracial husband-wife team to replace her. To improve the efficiency of the office, they try Peter out on a variety of other jobs. But while discussing the dwindling interest in the original Pawtucket Patriot while in a restroom, they find Peter enjoying a beer in there and make him the new company mascot. 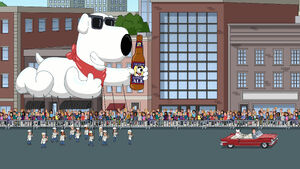 After an assortment of appearances, they happen to visit Peter at home and become enamored of Brian, making him Peter's sidekick, 'Hops the dog'. But following an appearance where Brian becomes 'Top Dog,' Peter finds himself relegated to sidekick. After being subjected to abuse, he decides to seek revenge by destroying a parade balloon of Hops. He succeeds and it releases helium all though town, which results in Brian being fired when people insist they will no longer buy the beer. As the town cleans up the mess, Brian apologizes to Peter who is still dealing with the aftermath of his actions, having resorted to taking a hostage to stay out of jail.

Retrieved from "https://familyguy.fandom.com/wiki/Pawtucket_Pete?oldid=216310"
Community content is available under CC-BY-SA unless otherwise noted.