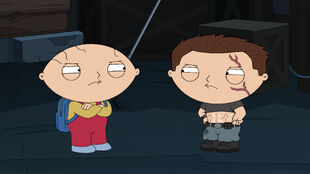 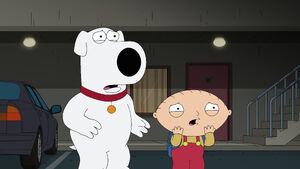 In a special cold opening, a nude Peter appears in a Terminator-esque manner outside The Drunken Clam before a special Terminator-style opening theme. Just as the real Peter heads to the restroom, a figure resembling Peter goes inside and borrows a gun from Cleveland. Stepping back outside, he acquires clothing that Peter throws away outside of the restroom window and a motorcycle that he takes after shooting Ernie the Giant Chicken. Later that night, Lois serves up broccoli and Stewie become so upset he designs a terminator-style robot that looks like Peter. Later, the same design appears at the house, determined to kill him to his shock and surprise instead of killing Lois. Figuring that a future enemy reprogrammed it and sent it back after him, Brian and Stewie flee and temporarily escape, but are cornered outside of a motel room. Brian tries to intervene and the terminator Peter stands down, revealing that he was programmed by Brian to kill Stewie. 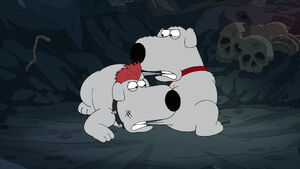 Using a portal device borrowed from Rick and Morty, Stewie and Brian travel to 2060 where they discover terminator versions of themselves fighting each other. Stewie splits off and finds his future self who reveals that a split over an Instagram comment resulted in their current situation, while Brian also meets his future self. When the two Brians accidently roll into future Stewie's camp trying to catch their own tail and set the two parties fighting, Stewie and Brian flee to the present, determined not to let their spat begin. Despite this, their habits start to wear on each other's nerves until they are pulled over by a terminator version of Lois sent to protect Stewie. Terminator Peter intervenes but more Terminator versions of various characters appear, sent back by their future selves after Brian's snarky Instagram comment on Stewie's photo with his future self goes live. They decide that the only way to stop the terminators is to kiss to show their friendship, which succeeds.

Meanwhile, the real Peter has been distracted trying to reach a high branch in a tree. When he finally does, he crashes into his female doppleganger and they fall in love.